Ladefoged Scholarship Awards are made from the fund established in memory of Peter Ladefoged (1925-2006), one of the foremost research faculty in the department.

These awards go to graduate students in the Linguistics Department to offset the expenses of student research projects, including for language consultants or experimental subjects if departmental Student Research Support funds are not available. For example, awards can be used for expenses related to carrying out laboratory experiments or for linguistic fieldwork, such as transportation, development of stimuli, or recruitment, not available from other sources. Funding may also be requested for undergraduate research assistants when their role is essential to the project. For example, awards can be used to pay native speakers for help with stimulus preparation or coding. These awards are not intended to replace existing funding mechanisms inside or outside the department. The research supported must be the graduate student’s own research, with a preference for dissertation-related research; faculty research projects cannot be supported in this way.

UCLA Linguistics graduate students who are applying for the Scholarship should consult the website for more information.

We welcome contributions to the Peter Ladefoged Scholarship Fund at any time, e.g. via the department’s Support webpage. 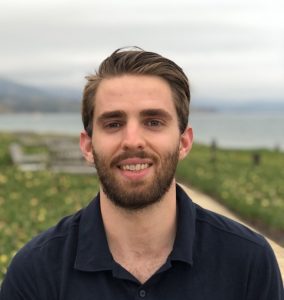 Jeremy Steffman (2020) — Jeremy Steffman’s research, funded by the Ladefoged scholarship, seeks to describe the phonetic structure of San Sebastián del Monte Mixtec (ISO: mks), in collaboration with Iara Mantenuto and Félix Cortés. The project includes a general phonetic description of the language, as well as an investigation of voice quality and possible interactions with lexical tone. Of particular interest are so-called “rearticulated” or “broken” vowels, which are often transcribed with an intervening glottal stop, e.g. /kaʔa/. Previous work on other Mixtec varieties has shown these vowels often lack an actual stop, and are realized with various combinations of laryngealized voice quality, and dipping pitch and intensity in the middle of the vowel articulation (sometimes with only intensity as a cue). In describing these vowels, one goal is to characterize how they are realized phonetically, especially in terms of voice quality, and to delimit the range of variation within and across speakers. Another goal is to explore the temporal dynamics of voice quality and pitch changes within a rearticulated vowel and to understand how glottalization is phased with respect to the vowel as a whole. A phonetic description along these lines will accordingly help better our understanding of voice quality in the language. 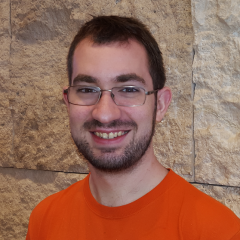 Canaan Breiss (2019) — Canaan Breiss’s research focuses on theoretical phonology, with specific interests in acquisition, phonotactics, and grammatical architectures, and uses novel quantitative data (from laboratory experiments, elicitation, computational modeling, corpus analysis, etc.) to bear on these questions. In line with these goals, the Ladefoged award will support him in his study a set of variable rule-ordering phenomena in the prefixal morphophonlogy of Acehnese (Malayo-Polynesian, spoken primarily in Indonesia). Acehnese has been described as having a set of phonological processes applying to a pair of prefixes which occur frequently in the language. One process, rounding, rounds the underlyingly high back unrounded vowel of the verbal prefixes peu- /pɯ-/ and meu- /mɯ-/ when prefixed to a base which begins with a labial consonant ({/p, b, m/}) to [pu-] and [mu-] respectively. A second process, spirantization, is also described as applying to the peu- prefix when the base begins with a labial consonant and is polysyllabic, changing the initial consonant of the prefix from /p/ to [s]. In contexts where both rules could apply the processes is traditionally reported as exhibiting an ordering relationship, with spirantization bleeding rounding. Preliminary corpus analysis indicates that this generalization is not so clean: when the processes overlap, each of the four possible outcomes are attested: that is, attested /pɯ-maŋat/ → [sɯmaŋat], [sumaŋat], [pumaŋat], [pɯmaŋat]. Supported by the Ladefoged award, he will design and carry out a series of wug-tests on native speakers of Acehnese to further investigate this interaction, and what it can reveal about the grammar. 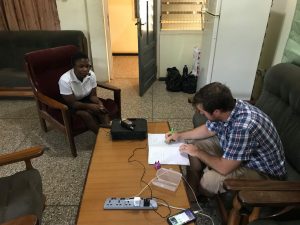 Travis Major (2019) — Travis Major’s research is focused on a Kwa language of Ghana called Avatime, which is spoken by roughly 28,000 people. From a formal perspective, he investigates a number of different phenomena. He looks at the morpho-syntactic and and prosodic properties of focus and givenness, how the language encodes speech reports (how one conveys what someone has said), and clause-linking (the syntactic/semantic properties of how clauses are combined). In addition to this formal research, he additionally collected textual data, which consists of traditional stories and songs. The funds provided by the Ladefoged Scholarship were used to help cover the costs of spending a month in Amedzofe, a village in the Volta Region of Ghana. 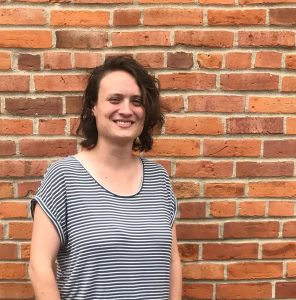 Beth Sturman (2019) – Beth Sturman’s research focuses on the interface between intonation and semantics. She works primarily on English and is particularly interested in constructions that are very distinctly marked by intonation, such as mixed quotation (aka “scare” quotes). The funds provided by the Ladefoged are being used to support research on the intonation used to mark exclamation in English (e.g. John bakes delicious desserts! or What delicious desserts John bakes!) She is collecting two sets of recordings; one set of sentences produced naturally within a context that licenses exclamation, and another set produced by speakers who produced the same sentences using only an intonational script with no context or punctuation cues. These recordings will form the stimuli for a perception experiment designed to isolate the most essential intonational markers of exclamation in English. 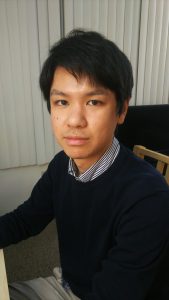 Hironori Katsuda (2019) — Hiro Katsuda’s research (with Jeremy Steffman) is concerned about how intonational structure in Tokyo Japanese influences perception of phonemic vowel length. He is running an experiment to test whether and how perception of a phonemic vowel length contrast is influenced by the implied prosodic position of a target sound in a carrier phrase, specifically whether it is phrase-medial or phrase-final. Based on previous findings for English, it is predicted that listeners should require longer vowel duration to categorize a vowel as phonemically long when it is in phrase-final position, reflecting an expectation of phrase-final lengthening. The funds provided by the scholarship is being used to recruit Tokyo Japanese participants in Japan. 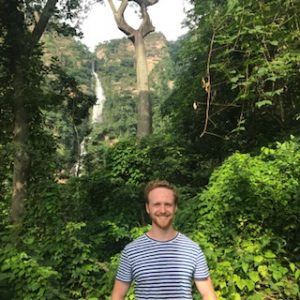 Blake Lehman (2019) — Blake Lehman’s research focuses on the interactions between tone, stress, and syntactic/prosodic boundaries. Thus far, this work has focused on two languages: Hän, Athabaskan language spoken in Alaska and Canada, and Avatime, a Kwa language spoken in southeastern Ghana. Work on Hän has shown that what appeared to be a morphological asymmetry between nouns and verbs in terms of tonal behavior was in fact an effect of prosodic phrasing. Initial work on Avatime has focused on vowel hiatus resolution, and how this can potentially interact with syntactic and prosodic structure. The funds provided by the Ladefoged Scholarship are being used to support fieldwork in Ghana and Alaska, as well as supporting work with archival materials on Hän. In addition to work on theoretically interesting aspects of these languages, the fieldwork supported in part by this scholarship is also focusing on documenting culturally significant uses of language, in particular Avatime songs and traditional narratives. Kristine Yu (2010). Kristine Yu’s current research is about modeling how kids could learn tonal categories in tonal languages (languages where differences in pitch signal contrasts in lexical meaning). A big component of the project is to first understand what the kids are trying to learn, i.e. to study how tones themselves are defined in (language-specific) multidimensional acoustic spaces, and thus she has been collecting tonal production data in a representative sample of tonal languages of the world. The Ladefoged Scholarship helped fund fieldwork on the phonetic implementation of tone in a dialect of Hmong, a language of Southeast Asia with large populations of speakers in Fresno, CA and St. Paul, MN. She recorded speakers in Fresno saying the seven different tones of White Hmong in phrases and sentences and is currently analyzing the data. She chose to include White Hmong in the sample because it includes a “breathy” tone, a tone in which speakers sound like they are exhaling as they speak. There are a number of tone languages like Hmong in which voice quality cues in addition to pitch cues distinguish tonal categories, and she hopse to understand them better using Hmong as a model system. The data and analyses of the Hmong recordings and recordings of all the other languages in the project will be available on her webpage. Robyn Orfitelli (2010). Robyn Orfitelli’s research concerns the first language acquisition of subject-to-subject raising sentences (e.g. ‘Flossie seems to Freddy to be wearing a hat‘). Previous work has found children to have non-adult comprehension of such sentences until as late as 6-years-old. The Ladefoged scholarship is partially funding a series of studies which investigates three possible explanations for children’s non-adult performance: (1) specific lexical items (e.g. ‘seem to’ versus ‘tend to’, ‘be likely to’, or ‘be about to’), (2) the presence of an additional ‘experiencer’ argument (e.g. ‘Freddy’ in the initial example), or (3) some feature the syntactic operation which underlies raising itself. Victoria Philp Thatte (2009) – Victoria Thatte’s research explores how infants go about learning the sounds of their first language. The study partially funded by the Ladefoged Scholarship investigates whether 4.5-month-old English-learning infants listen longer to syllable-initial voiceless fricatives (“foo”) than voiced ones (“voo”). So far, the results indicate that this is in fact the case, which means that infants must have some awareness of either: (1) the fact that voiceless fricatives are more common at the beginnings of syllables in English than voiced fricatives, or (2) the phonetic properties of voiceless fricatives that make them crosslinguistically more common than voiceless ones. Natasha Abner (2009). Natasha Abner’s research focuses primarily on the formal syntactic and semantic properties of American Sign Language (ASL). Her work has shown that apparent optionality among question structures in the language is, instead, motivated by the semantic properties of each structure. The funds provided by the Ladefoged Scholarship are being used to transcribe a video corpus of naturally occurring ASL data. Once transcribed, these data will provide a more adequate means of investigating the contextual appropriateness of syntactically distinct question structures in ASL.